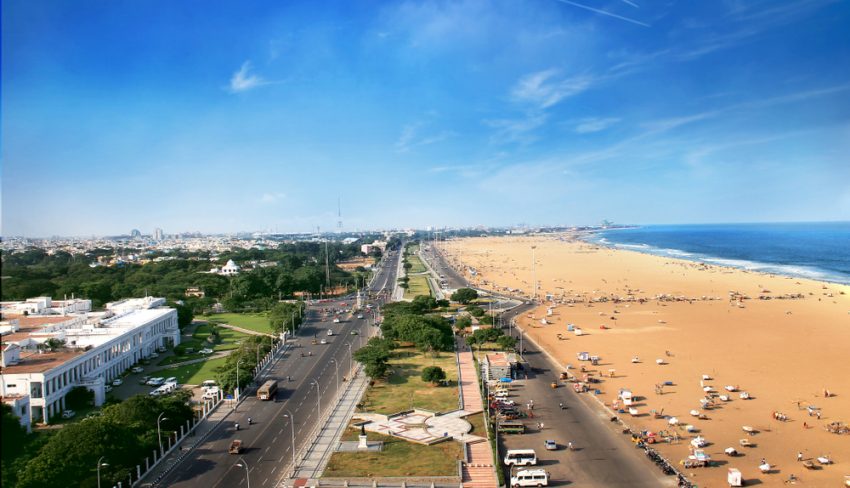 Chennai, formerly Madras, is the fourth largest city in India and the capital of Tamil Nadu in South India. It is located on the beautiful Coromandel Coast in the Bay of Bengal. The centre of Dravidian culture, this city is a showcase of India’s cultural heritage. The city was once occupied by Portuguese and Dutch traders who created a trading hub in the region. The modern city of Chennai was developed from a British settlement called Fort St. George, which was merged with surrounding villages.

Chennai is a sprawling city with interesting things to see and do in almost every locality. The warm and slightly humid weather makes it difficult to walk for too long. To explore the city in all its heat-ridden glory, you should consider the AC bus hire in Chennai by redbus.

Here are some of the interesting sights to see in this ancient yet modern metropolis.

There is nothing quite like an early morning or evening stroll on the 3 km long Marina beach. The fresh sea breeze alongside the lapping clear waters of the Bay of Bengal is only 18 kms from the airport, and just a few hundred rupees using bus hire.  The Madras Lighthouse is located on the south side of the beach. Originally built to guide British ships safely to port, this structure has now been modernized. The ocean views are best enjoyed, without regret, following a relaxing trip back using the ac bus hire service in Chennai.

The Kapaleeshwar temple dedicated to Lord Shiva – a fantastic specimen of Tamilian temple architecture – is just a 30-minute drive from Chennai International Airport, covered by part of redBus’s default bus hire services. It has vivid statuettes in multiple colours, pillared mandaps, and a tall and stately gopuram. The temple, originally destroyed by the Portuguese in 1566, is in the bustling Mylapore neighbourhood.

While you ride through the area in a bus hire sedan, you may also want to check out the beautiful handloom and silk saree shops that served women from the time of your great grandmothers.

The St. Thomas Cathedral Basilica, San Thome, is believed to be built over the remains of St. Thomas, an apostle of Jesus Christ. The Portuguese built it in the 16th century.  It is still considered a sacred place of pilgrimage for Christians around the world.

The Cathedral is sparkling white; set against a seascape only 17 kms from the airport, and is a beautiful sanctuary when you want a bit of quiet. The tall spires are 155 feet in height. If you use a bus hire service by redBus, the Cathedral is only minutes away after your trip to Marina Beach.

Vivekananda House or Vivekanandar Illam, in Tamil, is a museum dedicated to the life and works of Swami Vivekananda, the great Indian spiritual leader and philosopher. The building contains a permanent photo exhibition of his life. It contains many impressive high-tech displays using augmented reality and 3D reproductions. The Swami was supposed to have stayed here in 1897 and drew huge crowds when he spoke. The 8-hour bus hire in Chennai service can be availed to make a day out of this visit.

The majestic, well-maintained complex on Pantheon road was built during the British occupation of India. It holds a treasure-trove of artistic and historical artefacts, some dating back to the 2nd century BC. The bronze figurines from the Pallava Era have influences from Buddhist, Jain, and Hindu traditions. You can explore the famous dancing Shiva of Nataraja and the Ardhanarishwara form of the ancient God-couple Shiva-Parvathi, and other historical facets dating back to the Chola dynasty by chartering a sedan through bus hire (or even a tempo if you’re exploring in a group!).

This wondrous city has all that one could hope for in terms of art, culture, religion, spirituality, and food. Chennai is also a modern city with malls, international restaurant chains, and an active nightlife. You should eliminate the hassle of travelling within the city by looking for only the best bus hire in Chennai – redBus.