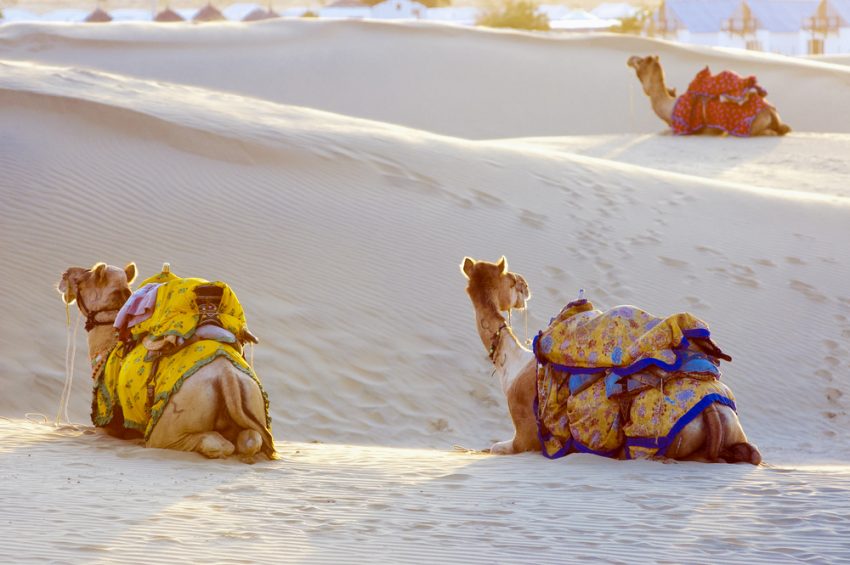 Jaisalmer is one of the most popular tourist destinations in India. With its numerous forts and palaces, it is otherwise known as the Golden City. What makes this city most sought after is the annual Jaisalmer Desert Festival.

This winter festival is a unique spectacle of various colors, entertainment, and cultural events conducted over 3 days. It is a wonderful opportunity for the tourists to know more about the place and its traditions. The Rajasthan tourism department conducts the Jaisalmer festival in the dunes of the Thar Desert, a few kilometers away from the city.

Like many of the festivals in India, the Jaisalmer deser festival also has a connection to Hindu mythology. According to the legends, Lord Krishna had predicted the birth of a successor of his Yadav community and would make his kingdom here. Later in 1196, Rawal Jaiswal who was a descendant of the Yadav community established his kingdom here. In the delight of the prophecy coming true, people’s celebrations soon turned into an annual festival.

The city of Jaisalmer is also named in honour of this king. So the major event has a direct connection to the ancient king. The festivities start with a grand procession that starts from the Jaisalmer Fort, the principal residence of the king. It continues through the streets and reaches the Sam Dunes in the desert.

The festival marks happy moments for people and provides ample opportunities for the guests to enjoy themselves. It is also an opportunity for the locals to showcase their heritage, culture, and talent in the various fields which are on display at Jaisalmer festival.

Why is the Jaisalmer festival important?

Though the Jaisalmer desert festival started as a means of celebration in ancient times, it is now used as a stage to display the rich culture of Rajasthan. The aim is to catch the global eyes and increase tourism to this part of the world. It is also a way to demolish the common notion that Rajasthan is just about the desert, palaces, and forts.

Using the famous desert as its background, the grand festival invites everyone from within the country and those from outside to witness the colourful culture, folklife as well as traditions of this state. Because of the ancient connection to the festival, the events conducted during the festival include several traditional games and races.

The various events conducted during the Jaisalmer Mela include dance and music among other entertainments. There are interesting competitions such as the camel race, turban tying, contest of the longest moustache, and a Mr Desert contest as well. Guests can roam around the festival grounds and watch the dance performances using the Fire and Gair etc.

What to do at the Jaisalmer winter festival?

You can see daring acts of acrobatics performed by the nomads. The spine-chilling execution of the act by the local performers includes balancing on a rope while carrying pots stacked over their heads. Acrobatics is also performed on the camel.

One of the oldest dance forms of Rajasthan, the kalbeliya dance is something that should never be missed. The colourful costumes of the dancers enhance their performance when they go twirling at a fast pace. It will be an incredible experience to witness this dance form.

As the name suggests, this race involves matka or earthen pots filled with water. It requires you to carry a water-filled pot and race to the finishing line without spilling water. Both locals and visitors can take part in this competition.

The traditional polo game involves riding on horses but here at the Jaisalmer winter festival, you can see polo matches while riding the camels. The two teams are formed by the Border Security Force or BSF personnel. It will surely be one of the unique experiences for the visitors.

One of the prominent parts of the Rajasthan heritage is puppetry using colourful dolls on strings. All cultural events in Rajasthan include a puppet show. The winter festival of Jaisalmer is no exception and people can enjoy this spectacular show during this time.

There is also a thrilling performance by snakes. The snake charmers lure and hypnotise the snakes to dance to their tune. It is an integral part of both Rajasthan and Indian traditions.

When and where is the Jaisalmer desert festival conducted?

The Jaisalmer desert festival or the Maru Mahotsav Jaisalmer is conducted on the sand dunes of Sam Dunes. The location is about 42 km away from the city of Jaisalmer. The location makes it convenient for the other events during the festival- the desert safari. People can indulge in desert safari with the help of a professional guide and explore the desert.

The festival is conducted for three days annually in February. The climate during this time will be comfortable. It will be right after the winter and just before the hot season. The dates for the Jaisalmer Festival 2022 are 14th to 16th February.

How to reach Jaisalmer Festival venue?

The Rajasthan roadways are well developed, especially in the city areas. You can reach the Jaisalmer festival by bus, train, or car. There is no airport in Jaisalmer so the nearest airport is at the Jodhpur airport. From there you can get a bus or a car to reach Jaisalmer. RSRTC buses are widely available to Jaisalmer from other parts of Rajasthan, Delhi, Ahmedabad, etc.

You may find various tour packages to Jaisalmer or for the Jaisalmer festival, but travelling on your terms has its charm and flexibility. The online bus booking and other travel arrangements are convenient for such planning. Plan your trip to Jaisalmer and explore the various forts and palaces here!

You may like to read: Best Himachal Foothills Holiday