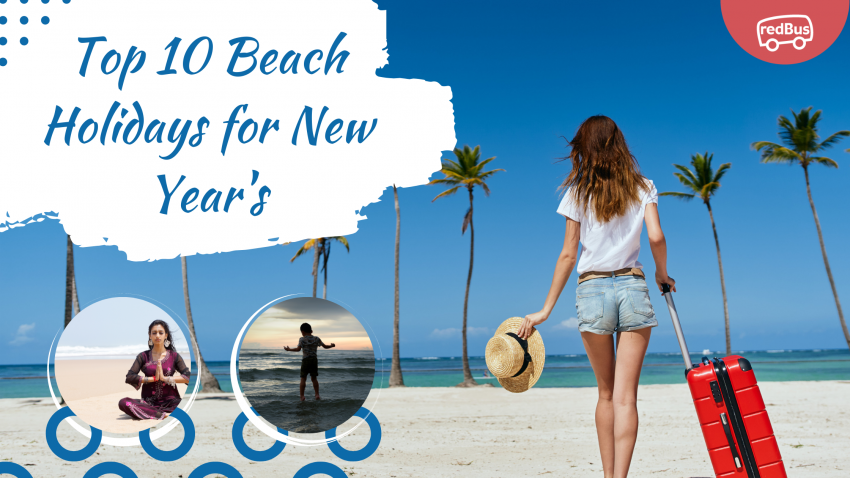 New Year’s is the perfect time to get loose from your busy schedules and plan some precious moments with your friends, families, and loved ones. With year-end leaves in schools and colleges, there’s a huge increase in tourism all across the country. Since the end of December marks the winter season in most parts of the country, people usually try to travel to warmer places, and what better place to go amidst the winters than warm and cozy beaches. Being a country with over 7500 km of coastline, India surely has a long list of beaches to choose from.

If you are planning to travel to these places comfortably, you can choose to travek by bus and easily make online bus ticket booking on redBus.

Goa beaches need no introduction. They are among the most popular beaches in the country, and also the continent. The entire state is flooded by domestic as well as foreign tourists and New year’s eve is no exception. The Arabian Sea in itself is a treat to eyes but the parties are what keeps the nights going that time of the year. redBus offers bus services from various important cities in Maharashtra and Karnataka connecting them to Goa. So book your bus tickets now!

Andaman and Nicobar is undoubtedly one of the best beach destinations in the country. It is home to world-famous beaches like Neil Island, Havelock, Ross and Smith, and other offbeat beautiful places like Diglipur and Mayapur. One can reach Port Blair via flight or ship and can then travel across various connecting islands via buses.

Gokarna is not just the temple town in Karnataka, but also has among the most underappreciated beaches in the country. The beaches nearby are as good as beaches in Goa, but attract less crowd, and hence are a better choice for people wishing to spend some quiet quality time on their trip. There are various redBus routes from cities like Bangalore, Chennai, Mysore, etc connecting Gokarna to nearby towns and even neighbouring states.

Kovalam beach in Kerala is another world famous beach in India where tourists from all over the country and beyond visit during the winters. One of the reasons is also that Kerala is very hot for people not habituated to living in that climate during the rest of the year. Kerala has excellent public transport and booking bus tickets via redBus offers various special and exclusive discounts to the passengers.

The city of Puri in Orissa is a major pilgrimage site for Hindus all over the country. It is home to the famous Jagannath temple among many other important temples along with beautiful beaches and art and architecture dating back to centuries. The Puri beach is always filled with crowds as it is one of the most family friendly beaches in the country. Puri is extremely well connected to Bhubaneswar, Kolkata, and other towns and you can easily book your bus tickets for your Puri trip via redBus.

Minicoy, Thundi Beach and Kadmat are the famous beaches in Lakshadweep that are known for their cleanliness and environment friendly restrictions. Lakshadweep is a cluster of islands famous for its coral deposits. People from all over the world visit the place to witness its mesmerizing natural beauty.

Rushikonda beach in Andhra Pradesh lies on the coastline of Bay of Bengal. It is known for the wide range of beach activities people can indulge in along with the guided watersports as well as the casual beach day out. Rushikonda beach is located in the city of Visakhapatnam and can be easily reached via booking tickets via redBus.

Malpe beach in Karnataka is undoubtedly the most offbeat beaches in this list. It is mostly known for its pristine white sand and the cozy food shacks that people enjoy during their vacations. The town of Malpe is extremely well connected to all the major cities in Karnataka as well as neighbouring states via redBus.

Marina beach in Chennai, Tamil Nadu is one of the longest beaches in the world. It is also the longest beach in the country and tourists pour in huge numbers to witness the grandiosity of the state as well as the pristine beaches it offers.

Digha beach in West Bengal is among the most affordable destinations for beach holidays. There are redBus buses available from various parts of the state as well as the country to Digha. The buses come with a wide range of economic and luxurious options. Adjacent travel destinations like Mandarmani, Henry’s Island, Frazerganj, etc are also easily transportable via redBus.

Now that you have a grasp over the best beaches in the country, there’s no reason to delay planning your New Year’s vacation for this year. With less than a month left, there will already be surge prices and crises  in popular destinations. It is hence always wise to pre-book your bus tickets via redBus and confirm your accommodations beforehand. You can get additional discounts and complete waiver of surge prices on pre-booking your bus tickets via redBus website or download the redBus app.