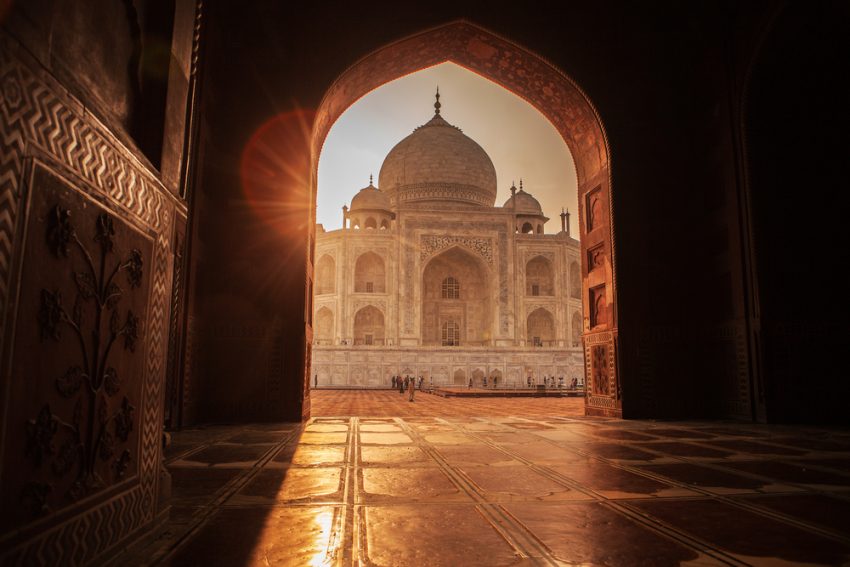 Taj Mahal, one of the glorious 7 wonders of the world is a jewelled crown of the country. Its majestic structure attracts millions of tourists from across the world, every year. What makes the Taj Mahal stand apart from other monuments is its white marbled exteriors and tall minarets. Its sheer beauty and huge structure is captivating and oozes exquisite Mughal architecture. It is situated in the city of Agra, Uttar Pradesh. Though everyone is spellbound with its beauty, not many perhaps know the Taj Mahal’s history. Behind this wonderful monument is a love story that is eternally etched in Indian history for years to come.

The history of the Taj Mahal

During the 1600s, there was a Mughal emperor named Shah Jahan who fell in love with a beautiful Princess of Persian descent, Arjumand Bano Begum. Captivated by her beauty, he decided to marry her. After their marriage, he changed her name to Mumtaz Mahal which translates as “Jewel of the Palace”. Though the emperor had many wives, she was his favourite amongst all and he was deeply in love with her. The two of them were inseparable, hence he would take her on all his tours and also sought her advice in political matters. Tragically, in the year 1631, Mumtaz Mahal passed away during the birth of their 14th child. Shah Jahan was devastated due to the death of his dear wife and hence in her memory, he decided to build a tomb that would be the most beautiful and majestic in the entire world.  The construction started in the year 1632 and was finally completed in 1653. It took a total of 22,000 labourers to finish this mausoleum and in today’s date, it would have cost a whopping $1bn. As they say, one cannot put a price tag on love.

Interesting facts about the Taj Mahal

The sections of Taj Mahal

The Taj Mahal has 5 sections:

The main attraction at the Taj Mahal is the tomb built in the centre. Built with white sangemarmar (marble), it is 50 feet above the riverbank to ensure there is no seepage.

The months between May to July must be skipped due to excessive heat and not many people visit the monument during this time. The ideal time to visit is between October to February since the weather is pleasant. During the monsoon, the Taj Mahal is a sight to behold surrounded by lush green gardens and the beautifully flowing Yamuna River.

The Taj Mahal is open from 6 am to 7 pm but one must keep in mind that the palace is shut on Fridays since the mosque is open for prayers and tourists aren’t allowed entry.

Tips for visiting the Taj Mahal

By Flight: Agra is connected to almost all the major cities in the country by flight. Although the only airline connecting Agra to the other cities is Air India. Since there is no International Airport, tourists can take a flight to Delhi or Mumbai and then take a flight or train to reach Agra. The distance between Delhi and Agra is 200 km.

By Train: Some trains regularly ply between Agra and cities like Delhi, Mumbai, Kolkata and Bangalore. The nearest Railway station is the Agra Cantt railway station and tourists can hire autos and taxis to visit the tourist destinations.

By Bus: There are two major bus stations in Agra, Idgah bus stand and ISBT. The Uttar Pradesh State Road Transport (UPSRTC) buses regularly run between Delhi and Agra. The distance between Delhi and Agra is 230 km and the journey is 5 hours. Agra bus tickets can be bought online to avoid last-minute hassles. UPSRTC buses to Agra are luxurious and convenient. redBus offers good deals on bus tickets to Agra and can be booked in advance to save time and skip the long queues. One can choose according to their budget. There are many options like AC/Non-AC Sleeper, AC/Non-AC semi sleeper and AC/Non-AC seater.

You may like to read: Udaipur- A Dreamy Vacation